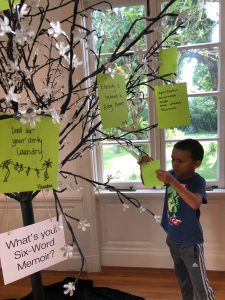 At the interactive Maker’s Space, exhibit viewers can come and contribute their own Six-Word Memoirs.

The Six-Word Memoir has traveled the world since  founder Larry Smith asked people: “What’s your story in six words?” in a simple Twitter prompt in 2006. And now in its thirteenth year, this powerful form of self-expression has found its aloha spirit Maui, Hawaii in a Six-Word Memoir art exhibition at the Hui No’eau Visual Arts Center.

Hui No‘eau is a sturdy arts nonprofit in Upcountry Maui. The center offers community facilities for glass, jewelry making, printing and more, and is open to the public daily, free of charge.

A few summers ago, Smith spent time in Maui, Hawaii, where his son was a camper at
“The Hui,” as the locals call it. As he came to know the arts center and the wonderful community within it, Smith thought it would be an ideal place to start an exhibition of mixed media Six-Word Memoirs. “The Hui is a place filled with self-expression by students and seniors, new artists and seasoned pros, and felt like the perfect environment in which to bring Six Words,” says Smith.

The call for submissions to the exhibition was open to the public, with categories for both adults and children to submit their work. The center hosted an opening reception on June 7, where the exhibition was warmly received by artists, art members, and the public. In the true spirit of the open and interactive mission of the Six-Word Memoir project, the curators created a Makers’ Space where gallery visitors were invited to write their own Six-Word Memoirs. In the few days since the opening, more than 100 memoirs filled the center’s spaces. 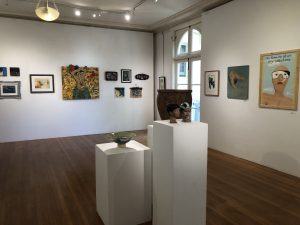 After the opening reception on June 7, 2019, over 100 new memoirs were contributed by community members.

From Sixers who voiced, “Don’t air your dirty laundry” to reminiscing on cigarettes as “The favorite of all my addictions” and “the attack of the killer mango” (referencing someone who got hit in the head by a falling mango in a photograph), artists took their own creative liberties with the project.

“This exhibition, in particular, is so unique because incorporating Six-Word Memoirs into visual arts adds an extra layer of context artists might not have been able to convey otherwise,”  says Josephine Bergill-Gentile, exhibitions manager at The Hui. “Looking at the pieces we received, if you were to remove the integrated Six-Word Memoirs they would still be beautiful pieces that tell a story. It seemed artists were able to further solidify their narrative.” 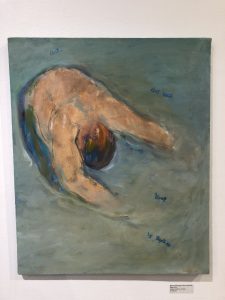 A close-up of one of the art pieces made by one of the featured artists that read: “Art, art will keep us together.”

At the exhibit, gallery visitors can be active participants in creating more content. They can take in all the artwork and memoirs by the exhibiting artists and then become inspired to create their own, sharing them in their Maker’s Space. The majority of the works The Hui received were two-dimensional, including oil paintings, watercolors, drawings and photography, along with a broad range of three-dimensional mediums such as jewelry, ceramic, glass, woven pieces, and found objects.

“It is such a thrill to have walked into The Hui a few years ago, felt what a creative and welcoming space it was, offered the Six-Word Memoir as one more tool for self-expression with that space, and now can witness its wonderful manifestations,” says Smith. “Projects like Six-Word Memoirs at The Hui introduce and open the form up to so many people and contribute yet another world of stories in the ever-expanding Six-Word world.” 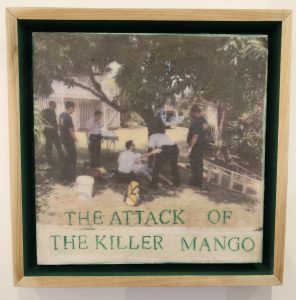 “The Attack of the Killer Mango” by Judy Bisgard is another mixed-media art piece from the exhibit.

The project has given Maui artists and the broader community an outlet to share their struggles, resilience and dreams with a mixture of media. “I think it’s a great way to get people involved and feel connected to the Six-Word Memoir project in leaving a little piece of their story with us,” says Bergill-Gentile.

The exhibit will continue to display the artwork based on Six-Word memoirs until July 26, 2019. 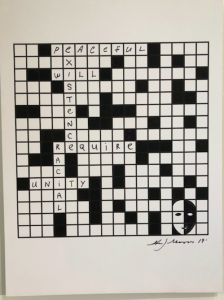 This piece of artwork from the exhibit reads in a crossword puzzle: “Peaceful existence will require racial unity.”