Hear about all the parties, contests, special projects, and our favorite stories from the site.
Newsletter
Login Logout Profile
“State of the Union” Top 6! Check out our picks.

Six Words to Inspire a Nation

Classroom of the Month: Second Graders in San Ramon, CA 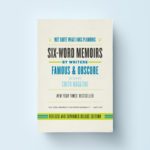 Not Quite What I Was Planning—Deluxe Edition

BUY: Amazon, Barnes & Noble, IndieBound This extra-special hardcover edition includes more than 100 new memoirs…for just a few more bucks. The original edition of Not Quite What I Was Planning spent six weeks on the New York Times bestseller list, and thanks to massive media attention—from NPR to the The New Yorker—the six-word memoir concept spread to classrooms, dinner tables, churches, synagogues, and tens of thousands of blogs. This deluxe edition has been revised and expanded to include more than sixty never-before-seen memoirs. From authors Elizabeth Gilbert, Richard Ford, and Joyce Carol Oates to celebrities Stephen Colbert, Mario Batali, and Joan Rivers to ordinary folks around the world, everyone has a six-word story to tell.

"Mexican and Jewish: I love carnitas." (A Litquake Report)

Six-Word Video: "When all else fails, just dance."

“Despair is a funny, beautiful thing” — Six-Word Memoirs from the Amazing Kids at Writopia