It All Changed in an Instant 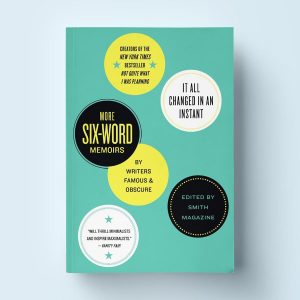 A thousand new six-word sagas from writers famous and obscure, and the first collection of six-word memoirs to include backstories. Here’s what the media has to say about It All Changed in an Instant: More Six-Word Memoirs by Writers Famous & Obscure.

NPR’s Talk of the Nation: “Can You Tell Your Life Story in Exactly Six Word?” Larry Smith and Rachel Fershleiser talk to host Rebecca Roberts and take listener calls in a 17-minute segment that quickly became the most listened to and commented on all of NPR.org.

Oprah Radio’s Jean Chatzky: Jean Chatzky and Larry Smith talk about how Six-Word Memoirs are a great way to boil down the essence of your life, including your financial life.

The Huffington Post: A beautiful slideshow of some of HuffPo editors’ favorite six-worders, including art from many of the memoirists.

Los Angeles Times: “Smith Magazine’s six-word memoirs have been lodged in the literary firmament since the 2008 release of “Not Quite What I Was Planning,” a pocket-sized collection that became a bestseller.”

Entertainment Weekly: “The book includes pensive memoirs by the likes of Molly Ringwald (‘Acting is not all I am’) and clever pieces by the likes of James Frey (‘So would you believe me anyway?’).”

KQED’s Forum with Michael Krasney: Larry and Rachel talk for an hour with SF’s legendary radio host, and take listener Six-Word Memoirs. There were so many people trying to call that the phone system brokedown! Listen to a podcast.

WUWM’s Public Radio’s “The Lake Effect”: Larry Smith and Rachel Fershleiser talk to host Mitch Teich about storytelling in the age of Twitter, the populist nature of the six-word project, and the careful treatment some of our most famous six-word memoirists take with their own six words.

Flavorwire: The daily culture magazine has a report on SMITH Mag’s Six-Word Memoir event at the 92nd Street Y that ends with a genius comparative chart between Six-Word Memoirs and Lyrics Jay-Z’s “Empire State of Mind.”

The Kansas City Star: Hundreds of readers contribute Six-Word Memoirs in a piece that challenges readers to write their own six word in the comments area (“Blue dot in sea of red,” “Born naked, raised Catholic, love fashion,” and “Don’t forget to lick the bowl.”).

Web100: Allan Hoffman talks to Larry Smith about the Six-Word Memoir phenom in an interview composed entirely of six-word sentences.