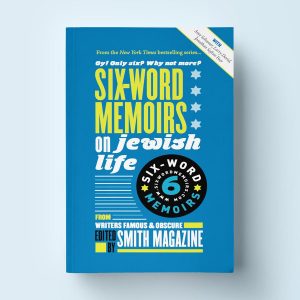 This chapter in the Six-Word Memoir book series examines a topic bursting with words: Jewish life. Here is what the media is saying about Oy! Only Six? Why Not More? Six-Word Memoirs on Jewish Life.

The Forward: “Millions of words, over thousands of years, have been written about the nature of the Jewish soul. But the most precise distillation of our people’s essence may have finally arrived in fewer characters than a tweet.”

J-Weekly: “The six-worders on Jewish Life are reflective of Jewish life itself: They run the gamut from hilarious to deeply poignant, with stops everywhere in between.”

The Jewish Exponent: “The concept has been bandied about the Shabbat table, in synagogues and among Jewish leaders. Rabbis have used the concept in sermons, and storytelling sessions at various JCCs and synagogues have, in Smith’s words, ‘created community in new ways.’ ”

The Virginian Pilot: “Chock full of stories on faith and family, duty and identity from Jews across the world.”