Things Don’t Have to Be Complicated 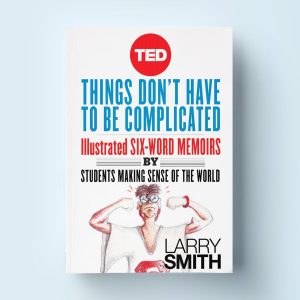 Featured in the TED Books Library and inspired by Six Words’ popularity in English classes and art classes alike, SMITH Magazine called for submissions for illustrated Six-Word Memoirs, in which we asked students, whether in grade school or grad school, to create a piece of artwork that enhanced their memoirs. Here’s what the press is saying about Things Don’t Have To Be Complicated.

Brain Pickings: “The micro-memoirs are divided into four sections — grade school, high school, college, and graduate school — and touch, with equal parts wit and disarming candor, on everything from teenagers’ internal clocks to the escapism of Alice in Wonderland.”

San Francisco Chronicle: “Smith’s selections, curated from thousands of submissions, shows how little age has to do with perspective. A 9-year-old girl from Virginia creates a Jackson Pollock-like painting accompanied by the provocative words “Two girls, both of them me.” A common theme, and a heartening one, is self-expression, suggesting that the Six-Word Memoirs project has given students a voice that they might not normally have.”

I Heart Daily: “Our love for Six-Word Memoirs is known. We weren’t sure how they’d take it to the next level, but they just did. Things Don’t Have to be Complicated: Illustrated Six-Word Memoirs by Students Making Sense of the World. We dare you not to be impressed and inspired.”