"Never too late to start living!"—Six Words from Tony Winners 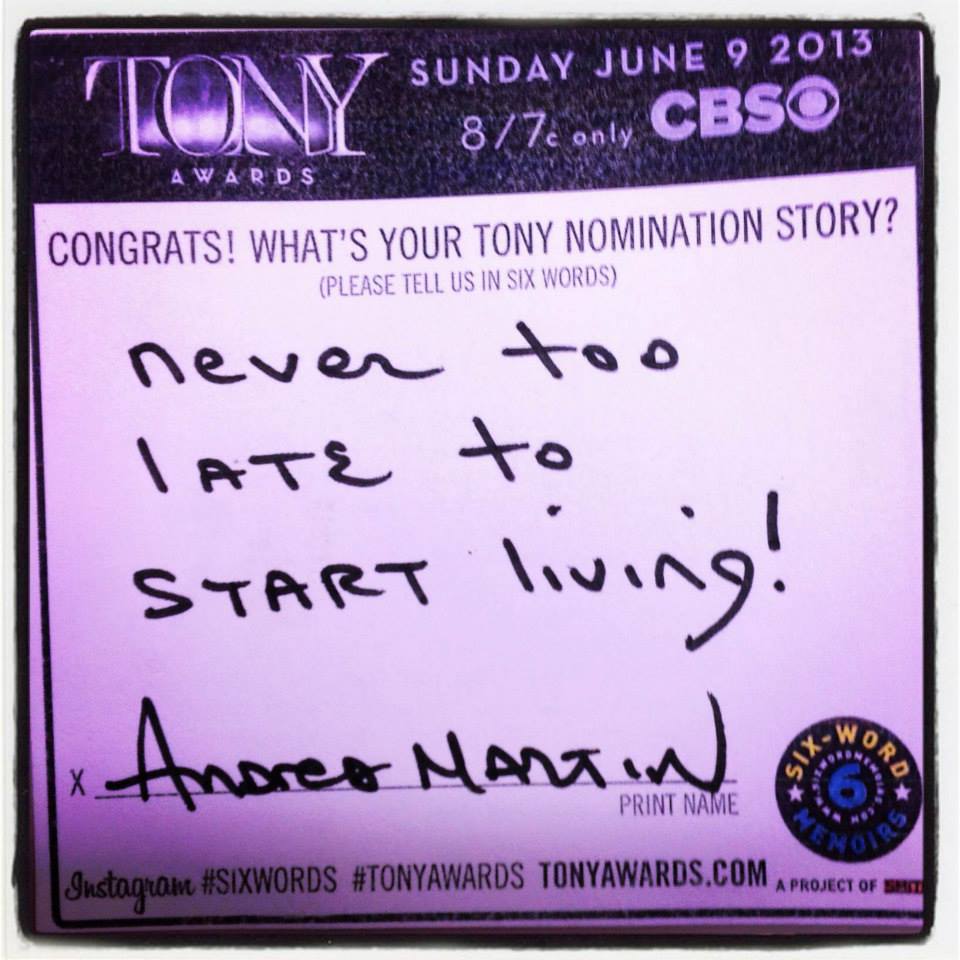 “Congrats! What’s your Tony nomination story?” was the prompt we gave Tony Award nominees, and from actors to scenic designers, Broadway’s best scribbled out their six-word reaction to their Tony Nomination. We shared their six words, by their own hearts and indeed hands in a photo gallery—you can see some of Entertainment Weekly's Popwatch favorite sixes in a story about the Six-Word Memoir/Tony Awards collaboration. On Sunday at Radio City Music Hall, the Tony Awards winners were announced—and some of these theatrical Six-Word Memoir scribes had the chance to say a few more words to the world as they accepted their award. In the plays category, Courtney B. Vance won best performance by an actor in a featured role for Lucky Guy ("It's Kandinsky! It's painted on both sides!"). In the musicals category, Gabriel Ebert won best performance by an actor in a featured role for Matilda The Musical ("Poignancy is ephemeral. Tonys are, too!"), Billy Porter won best performance by an actor in a leading role for the winner of best musical Kinky Boots ("Theater saved my life!!! #original dream"), and for her role in Pippin, Andrea Martin won best performance by an actress in a featured role ("Never too late to start living!")

Neil Patrick Harris, who contributed his Six-Word Memoir for one of our recent books (“Barney, Doogie—average names elude me!”) was once again the perfect host. Now if he'd just share his six words on what it was like to make out with a dog. At after-parties as The Plaza and The Carlyle I had a chance to meet a few of the stars. Richard Kind, who was nominated for The Big Knife, said he loved the concept of six words, and offered these nuggets for our upcoming book, Six-Word Advice: "The journey: more fun than success." I chatted with another six-word fan, Vanya and Sonia and Masha and Spike's talented and stunning Shalita Grant, whose six words— "Partied til 4AM, nominated by 8AM"—rung true among the joyous scene. And while first-time Tony nominee for Benj Pasek. He may not have won, but as I met his beaming mother, I knew his six words about being nominated for a Tony could not have been more true: "Jewish family freaking out on Skype!" Thanks to all the nominees who participated, and a special thanks to the inspiration behind "What's Your Six-Word Tony Story?" to Elisa Shevitz of The Broadway League and her amazing colleagues, including Erica Ryan, Shawn Purdy and Ben Pesner, as well as Ian Weiss the amazing crew of digital minds at Serino/Coyn. See photos of these memoirs below, and view the full set of photos on our Facebook page. 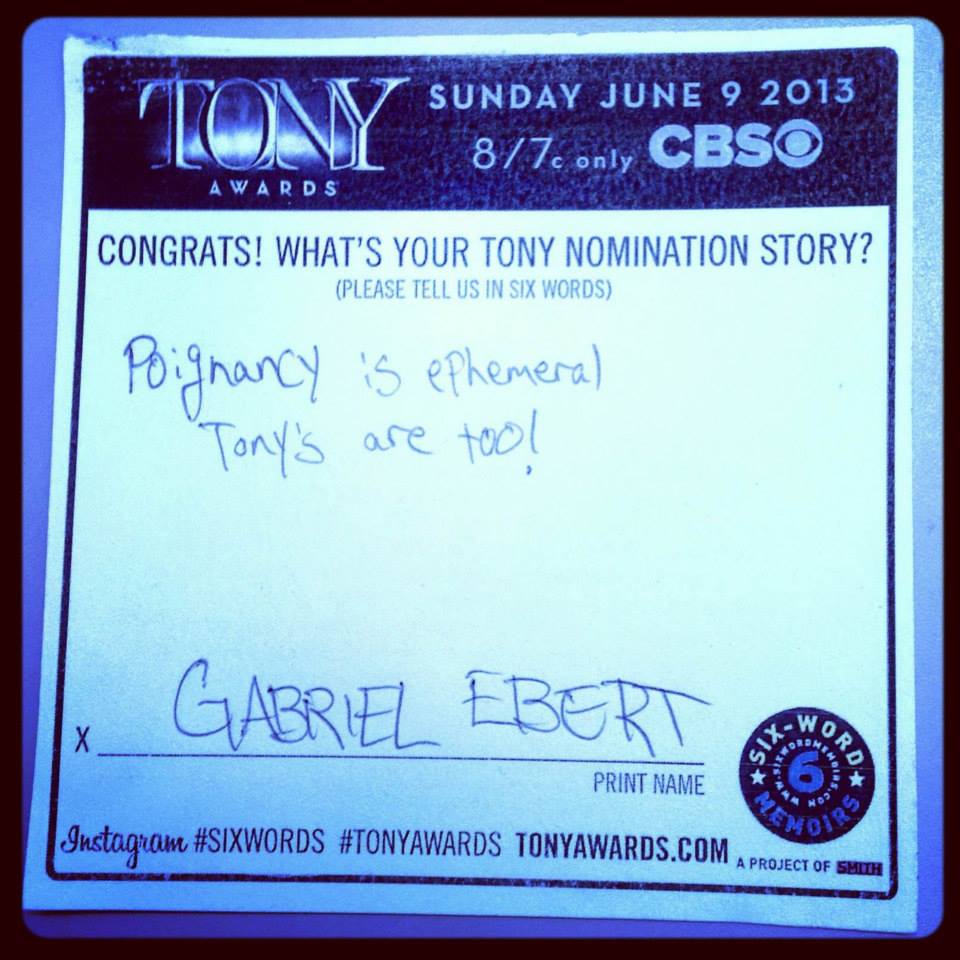 Picture this: It's the big luncheon to honor the Tony Award nominees at the InterContinental Times Square hotel. The place is wall to wall with some of the finest actors, directors, composers, and set designers of our time. The event is closed to the media, but we've got the inside track on how some of these year's finest stage actors, producers, directions, musicians, and others who make Broadway buzz described the feeling of being told they've been nominated for a 2011 Tony Award—in just six words. As this storied group of Broadway talent, up-and-coming and luminary alike, sat down at their tables, they found a card with this request: "Can you describe what you are feeling, right now, in just six words?" Here are a few of their six-word reactions below, and in a wonderful video that follows. “Mormon is clearly the new black.” —Robert Lopez, best book and original score nominee, The Book of Mormon “I enlisted in Larry Kramer’s war.” —Ellen Barkin, actress nominee, The Normal Heart