Classroom of the Month: Dawn Heideman’s BE THE ONE classes at Walnut Ridge High School in Columbus, Ohio 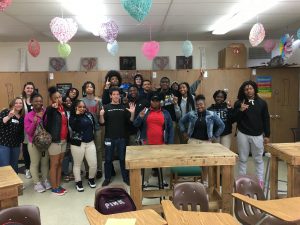 Our founder, Larry Smith, and his Six-Words team holding up 6 and representing BE THE ONE with Heideman’s students.

Dawn Heideman, a math teacher at Walnut Ridge High School in Columbus, Ohio, had read about Six-Word Memoirs, but it wasn’t until she heard Six-Word Memoir founder, Larry Smith, speak at a conference on diversity and education that she realized how her students could benefit from digging into the form. Heideman thought the simple six-word structure could help her students tell their story—no matter how difficult it can be to do so—without feeling like they needed to write a book or hit a big word count.

“It is not intimidating… only six words. Yet your words have to be carefully chosen,” says Heideman. “No wasted ‘chatter.'”

Our founder Smith visited Heideman’s classroom in April to talk about the origins of Six-Word Memoirs and to inspire the class to write stories on the spot. Students talked about sports being their only hope for a better life, while others told stories about the BE THE ONE program Heideman founded and how it inspired them. The students were at their desks, huddled around in a circle, speaking some of their truths—six words at a time.

“Dawn’s students warmed up quickly to this stranger with big hair wearing a T-shirt with a Six-Word Memoir on it and were everything she promised they would be: intense, funny, vulnerable, quick to learn and love six-word storytelling,” says Smith. “Spending a morning her students reminds me of the best part of the power of the six-word form to engage students and watch them shine.” 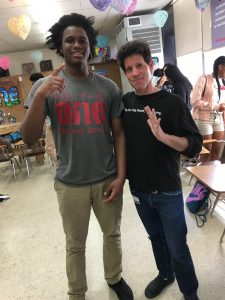 Larry Smith with one of Heideman’s talented student wordsmiths.

Even students who normally stayed quiet and kept to themselves in the classroom participated in the Six-Words workshop.

“Now I have another avenue to get students engaged and communicating,” says Heideman. “It is very effective. I watched the students pass Six-Word Memoir books around the circle. Students that would typically pass a book on quickly were reading.”

After Smith’s visit, Heideman challenged students to write more Six-Word Memoirs about their lives. Among her prompts was to ask what their school program, BE THE ONE, meant to them. Heideman founded the program to help her students—at-risk kids who have gone through trauma like domestic violence and homelessness—give back to their community and say no to violence. It’s a pact, says Heideman, between her and her students to help them achieve a brighter future.

Students shares memoirs about some of the hardest parts of life: “Domestic violence made me even stronger” and “My family is a twisted story!” They spoke of their resilience when the odds were stacked against them: “The struggle only made me strong.” They all wanted to achieve something, as encompassed in one student’s memoir: “Being understood is not my goal.” 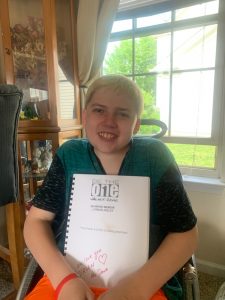 Ronald McDonald patient, Orian, poses with his BE THE ONE Six-Word Memoir book that Heideman’s students made for him.

Through the BE THE ONE program’s community service initiative, students met and bonded with a Ronald McDonald House patient named Orian and decided to give him a gift. Inspired by Smith’s presentation, they wrote and bounded a Six-Word Memoir book—a collection of their personal memoirs and ones about the BE THE ONE program—for Orian.

“Orian was severely bullied so we kind of took him under our wing,” says Heideman. “We made the book for him and sent it to Maryland to lift his spirits.”

According to his mother, Orian reads the book every night before bed.

Six-Word Memoirs has given Heideman’s students an outlet to share their struggles, resilience, and dreams. Heideman plans to continue to use Six-Word Memoirs in her classroom to help them express themselves and connect with others on a deeper level. “This tactic of getting kids to write, share and express,” she says, “will be used a lot!”