Lauren Zucker, a teacher at Northern Highlands Regional High School in Allendale, New Jersey, first came across Six-Word Memoirs through the power of social media. Zucker, a professional in the world of literature, was already familiar with the legend of Hemingway and the six-word novel: “For Sale: Baby Shoes, Never Worn.” However, it wasn’t until she came across a fellow educator’s post on Twitter that she discovered Six-Word Memoirs, and the important role it could play in her classroom. 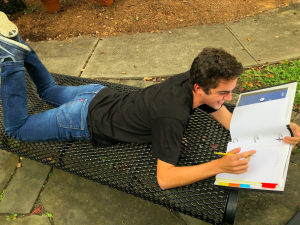 Zucker decided to test out the Six-Word Memoir assignment on her Honors Modern Fiction and Nonfiction class on the very first day of school, where she turned Six Words into her own version of a back-to-school icebreaker: “I asked students to write a six-word story to introduce themselves to the class,” says Zucker, “the story should reveal something about who you are.” She then went on to describe the assignment by explaining the Hemingway story to her students. As students of literary modernism, she hoped this particular example would resonate with her class. Then, before providing any other details, she instructed the students to create their own memoirs.

Zucker decided to hold off on explaining Six-Word Memoirs in depth (and showing her students the site) until after every student had written at least one memoir. She wanted the creativity and honesty of her students’ stories to shine through rather than being influenced by how others approached the short form of storytelling.

The results she received spoke for themselves. Her students expressed positivity (“Rainy day or blue skies, smile”) and passion (“She uses a brush to dream”). They told of the importance of standing up for who you are (“Don’t let stereotypes define your character”) and not caring what people think (“Be silly, dance confidently, think later”). They shared stories of both their values (“Brother, Mother, Dad. Family Comes First”) and their backgrounds (“One parent. One Child. One story”, “two coasts, six houses, thousand stories”). Finally, one student summed up how it really feels to be at this stage in life: “Highschool Student — Confused, But Having Fun.” 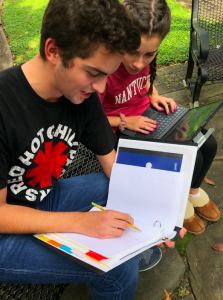 After students had crafted their own memoirs, it was time to take her class through the site and reveal the full story behind the Six-Word Memoir project. Zucker and her students were impressed by the ease and approachability of the website, appreciating that it is a tool for anyone to publish their own writing and make themselves heard. “Six-Word Memoirs were a fun, accessible way for everyone in the class to dive right into writing,” says Zucker. “We enjoyed pairing our stories with images and publishing them on the site.” 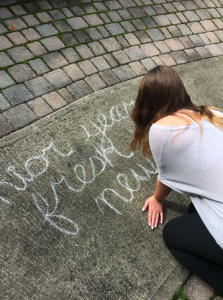 But it wasn’t enough to have her students write a Six-Word Memoir: she wanted their stories to be heard and to foster a community of storytellers insider her classroom. “First, I shared my own draft-in-progress and solicited feedback from students as fellow writers,” Zucker explains. “Then, students shared their draft with a peer, talked about their own writing process, and helped each other refine their choices.”

The peer-editing process offered opportunity for revisions on everything from word choice to grammatical structure. To offer the best guidance, the students first asked their partners what they were trying to say with their memoir, then made sure that the six words chosen were best-suited to convey that message. Throughout the editing process, students learned more about their peers and the stories behind their memoirs. 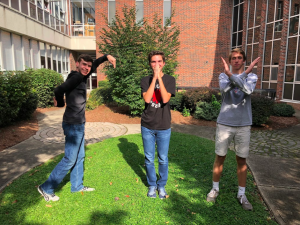 Finally, Zucker encouraged her students to share their memoirs aloud in front of the class. By creating this community, she was not only helping her class grow as speakers of their own story, but also as receptive listeners to the stories of others.

To Zucker, the importance of Six-Word Memoirs lies in its simplicity. In life, writers are often faced with restrictions when it comes to their work, in the form of word counts or other unique prompts. “The assignment reminded us that restrictions  such as word limits in writing can foster creativity and unexpected discoveries,” she says. Instead of being frustrated by those limits, Six-Word Memoirs teaches the student to learn how to use the rules to their advantage and be inventive within the confines of a word count. And in so doing, Zucker’s students aimed to do what all writers ultimately hope for: to make every word count.