The end of elementary school marks an important transition in a child’s life. It is a time of thoughtful reflection and unforeseen adventures; of bittersweet goodbyes and new beginnings. As each year at Linwood Howe Elementary in Culver City, CA comes to a close, the graduating fifth graders take time to look back on their years at their beloved school, before moving on to what lies ahead. To commemorate their elementary experience, each graduating class leaves behind a “Legacy Project,” displayed all over school and offering the students a creative way to leave their mark. 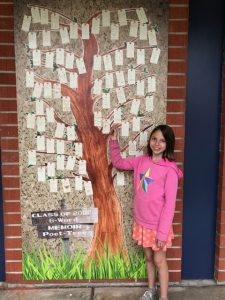 The idea for this year’s Legacy Project came from fifth-grade student Lyra Small. She imagined a beautiful poet-tree, where written words from every graduating student would be hung on the branches of a digital tree. It was a lovely image, but when it came time to bring it to reality, a slight problem presented itself: How do you fit the words of 77 students on one tree?

This is where Joanna Brody, Lyra’s mother, comes into the story. Brody has been a member of the Six-Word community since the very beginning. When she contacted us to share the news of her daughter’s school project, she recalled a poignant experience with the Six-Word Memoir project. “I entered your very first contest back in 2007 and was published in Not Quite What I Was Planning. My entry is on page 114: ‘Multiple miscarriages. Cousin will carry baby.’ I then ended up being included in the forward of your book because before the book was published, I wrote to you about how my Six-Word Memoir was no longer valid. You reminded me that many Six-Word Memoirs reflect a single moment in time.”

Brody used her own experience with Six-Word Memoirs to craft a quick solution for the Legacy Project. She realized that by limiting students’ words to just six, all 77 graduates’ stories could fit on one poet-tree. After running the idea by teachers, Brody rounded up several parents to visit the fifth-grade classrooms and explain the concept of the Six-Word Memoir.

The parents introduced the project with the original Hemingway memoir (“For sale: baby shoes, never worn”), as well as read examples from Not Quite What I Was Planning. “We asked the students how they interpreted the meaning of each poem, how these Six-Word Memoirs made them feel,” says Brody. The parents even crafted their own memoirs to show the students how it was done (“Joey, Lyra: students. Me: PTA President”, “My favorite ritual is morning assembly”). Even the principal was a part of the excitement, as she created a memoir for the first group of students she got to see grow from kindergarten to fifth grade (“My first class graduating. Viking Pride!”). 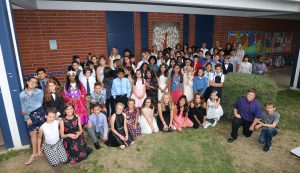 After seeing many different examples of Six-Word Memoirs, the students were set free to create their own and have fun with the project. “They were given creative license to throw out grammar and punctuation rules, use fancy fonts, and add their own artwork,” says Brody. The only rules:  memoirs must be six words, and had to be about their time at Linwood Howe Elementary.

Students ran with the idea in all different directions. Some looked back on their overall experience (“Fast, Fast, A Six Year Dash”; “The memories I’ll keep from here”; “Kindergarten was scared. 5th grade love”), while others focused on specific memories (“Went to Pali. Was super fun”; “Reading under desk pretending to listen”). Even students who hadn’t spent their whole childhood at Lin Howe still had positive memoirs to share (“Big change. Best choice to make”; “Only 3 years, but 100% education”). 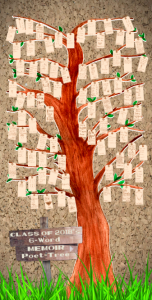 The students’ words left an undeniable impact on those around them. For fifth-grade teachers Stephanie Beebe, Casey Chabola and Greg Holman, the words provided a new way to help students with succinct writing: “In the past we had students reflect on their time in our school that led to long drawn out reflections.  Giving the students a framework to express their memories helped students to be concise with their thoughts and feelings.”

To Brody, the Six-Word Memoirs seemed to bring out the best in the students: “The creativity, the level of engagement, and the depth of emotion that accompanied this endeavor is truly awe-inspiring. But perhaps what is most impressive is how each student’s memoir and tag is a true reflection of their personality.” The Six-Word Memoirs showed just who the students really were, which in itself, is the true message of a legacy project. In only six words, the graduating students were able to leave behind a legacy encompassing their childhood, memories, and personal identity that will live on at Linwood Howe for years to come.