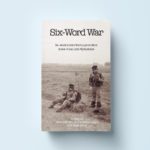 BUY: Amazon Instead of a book about Iraq or Afghanistan that tells only one soldier's perspective, Six-Word War is the first 'crowdsourced' war memoir that shares a story different than any other ever told about war. For the first time in history, one book contains the collective experience of our military at war in their own words. In a collaboration with Larry Smith and his original Six-Word Memoir project, this book contains thousands of raw war stories from a generation at war in Iraq and Afghanistan. What people are saying about Six-Word War: The Atlantic: In the age of Twitter, where 140 characters are redefining how we consume nonfiction, the six-word war matters. Together the stories weave a new perspective of how this generation defines the war and warrior. A generation that is painstakingly aware of its place in the world and the consequences of its actions. Stars & Stripes: This project will become the collective experience of our military at war for the Twitter generation. CBS Evening News with Scott Pelley: Veterans describe the war -- the anguish, the boredom, the horror -- in exactly six words.